Typographical Duet of Japan and Sweden 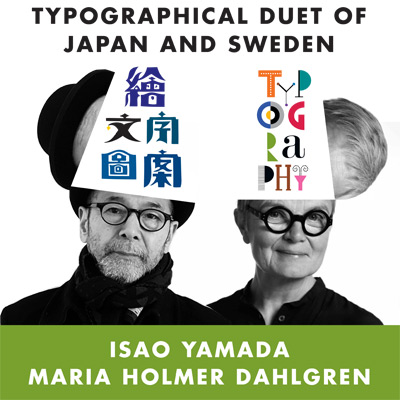 THIS EXHIBITION HAS BEEN POSTPONED.
The new dates will be announced as soon as things are settled.

The Japanese artist Isao Yamada makes all his works manually, with a delicate handicraft touch. Combined with literal context, his typography is poetical and contemplative.

He incorporates decorative patterns with letters, creating “emoji-zuan” (graphical picturesque letters). His designs are commissioned for book covers, theatre posters, signboards, logos and other personalised items. He is also known as a film maker, who implements his hand-written words in his non-digital cinema. His films have been presented across the world including the Moderna Museet in Stockholm.

The Swedish graphic designer Maria Holmer Dahlgren makes playful, colorful patterns and unique letters that are usually printed on trays, towels, carpets and other usable items that fit into the theme “everyday art”.

She is also known for her portraits of cities, landscapes and other favorite places. Her design is represented all over the world and she’s had her own collection at the Tate Galleries in England. Maria finds her inspiration in everyday things and truly believes that life is full of art.